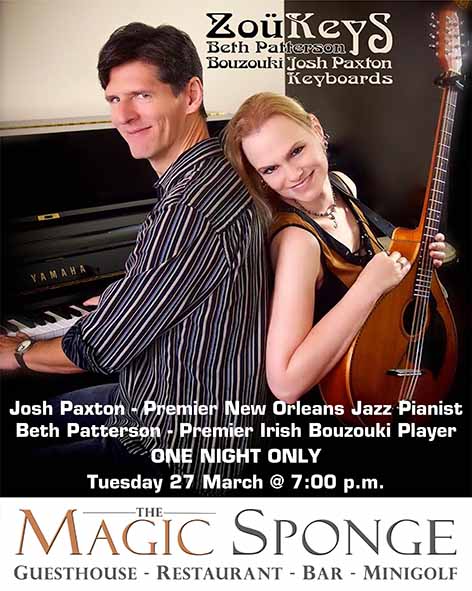 The Magic Sponge has scheduled a very special musical production for Tuesday night, 27 March. We are very proud to present the only Kampot concert by ZoüKeys, the internationally acclaimed duo of premier Irish bouzouki artist Beth Patterson and top New Orleans Jazz pianist Josh Paxton. Beth Patterson is one of the world's foremost players of eight- and ten-stringed Irish bouzoukis. Beth blends the music of Ireland, West Africa, India, Indonesia and the Caribbean into her own unique style. She has released seven solo CDs and has received airplay on every continent except Antarctica. She has appeared in over a hundred and fifty recordings, and her music has been used for the soundtracks of multiple motion pictures. She has also performed in seventeen countries across the Americas, Europe, Japan, and Oceania, and various artists have recorded over a hundred of her compositions and co-writes across the US, France, Ireland, and New Zealand. Josh Paxton has been one of the premiere pianists in the New Orleans music scene for the past twenty years. He moved to the city in the mid-‘90s to study jazz piano with Ellis Marsalis. He has performed and recorded with such diverse groups as the Wild Magnolias, Big Sam’s Funky Nation, the Cosmic Krewe, Maria Muldaur and Dr. John. He has also transcribed the music of James Booker and Professor Longhair for sheet music publication. In addition to regular solo performances, Joshua can frequently be seen playing with Johnny Sketch and the Dirty Notes and vocalist Debbie Davis as well as ZoüKeys. This is a once in a lifetime opportunity for Kampot to experience an exceptional performance by truly world-class musical artists. The music will start at 7:00 and admission is free.