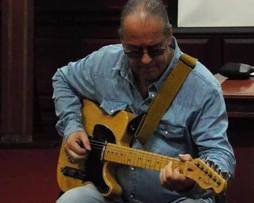 The Magic Sponge is pleased to present Earl Sullivan in concert on 15 December. Earl Sullivan has been playing classical guitar, flaminco and finger style for 45 years and has an impressive musical pedigree. He studied in Montreal at Marx Bourget School of Music in Montreal for three years under the tutelage of Louis Roy, two years in Toronto Canada at the Lebar Institute for Guitar under Darko Ted Lebar, the former President of the Toronto Guitar Society, and he also Attended Master Classes with Narciso Yepez and Turibio Santos. Sullivan also studied three years with Internationally renown guitarist and recording artist Michael Laucke and attended three years at Concordia University as a music major. He has taught at Music City in Toronto, two years at the Quebec Conservatory of Music in Montreal Quebec and another three years of teaching experience at his home studio. Earl Sullivan has performed all over Canada, USA and throughout Asia and is a versatile in Classical , flamenco, bluegrass, country, and jazz styles. His concert at The Magic Sponge begins at 7:00 p.m. and admission is free.