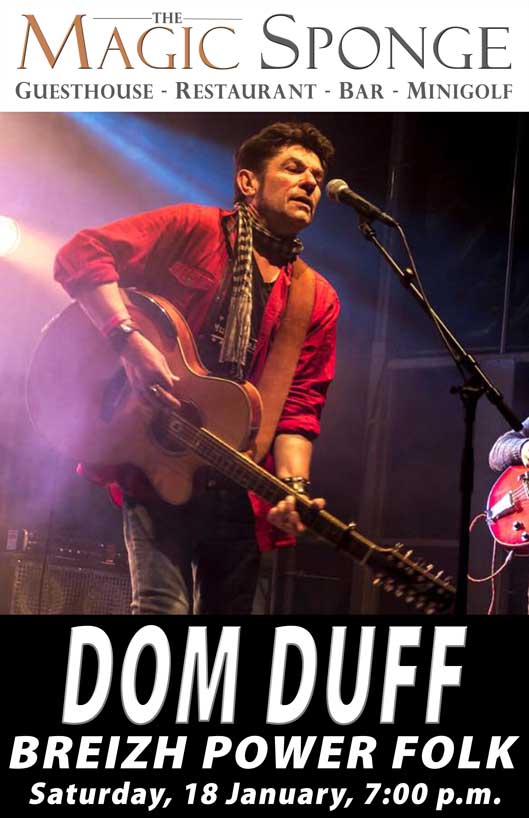 We are very proud to welcome back to The Magic Sponge noted Breton singer-songwriter Dom Duff in concert for our Saturday Music Showcase International Artists Series after a two year absence. Dom Duff was born in Plouescat in the Finistère department of Brittany in northwestern France and was raised on his parents' coastal farm. He teamed up with friends in 1995 to start the Breton music band Diwall, touring Europe and releasing two albums. In 1999 he established himself as a solo act. His songwriting is mostly in Breton and 2003 his first album, "Straed an Amann" (Butter Street), was nominated for 2003 best Breton album. He has collaborated with such artists such as Alan Stivell, Kila, Pascal Lamour, Bagad Roñsed Mor and Skilda. In 2010 Duff teamed up with Swansea songwriter Andy Jones to create "Brythonics", a show about Brythonic migrations. In 2010, he won Breton Singer of the Year and Best Album awards at the Prizioù, France. In 2012, he was asked to write the anthem for the famous Breton relay "Redadeg", and as a result his song "Foeter Breizh" (Breton Wanderer) has been sung by runners all over Brittany. Dom Duff has over 7000 Facebook likes and can be found on Wikipedia. He performs folk rock with a Breton twist. Check out his videos on Youtube and you'll see why we're so excited - it's going to be great, and admission is free!